By Mark Orr of Something Solid 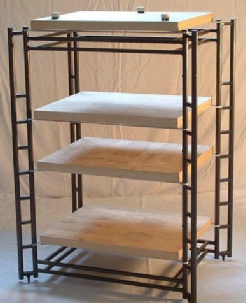 Why use specialist supports?

Like cables specialist supports are a cost effective way of getting more out of a system. Electronic components benefit from individual shelving, speakers from being still on a stand. Unfortunately, they are not all the same, and don't all work in the same way. Put it this way: if you bought a high performance car would you run it on remoulds? This is, metaphorically, what you are doing giving a hi-fi system poor supports.

How do you judge?

Often, when talking to people who are not enthusiasts, the comment 'I could not tell the difference' is made. I have a stock reply ' You could, but you might not think it is important' This is something you will have to work out for yourself. This is how I do it. The starting point for most component evaluations is to substitute them into a known system: used in selling as an A/B demo. It is really the only way to start but the upsetting of system synergy means being aware of 'shooting the messenger'. Rapid A/B substitutions are not a good idea.

With hindsight I will guarantee that 20 minutes doing this will result in a mistaken judgment, and maybe an expensive mistake. Why? Because you start to listen to odd bits of the music, a bass line, a voice, an audience noise, and so lose track of the whole. I have a collection of albums where one track is used for an 'odd bit' just to give a reference point, to work out exactly what the change is doing, but a better indication is when you end up listening to the whole album. When I stop thinking about the system is when it is really working. If you are listening to albums you have left for months, making sense of music you had struggled to understand, then the changes are working.

After all what the extra expenditure should be buying you is access. I am increasingly convinced the 'golden ear' beloved of critics should be made a notifiable disease. Back to A/B comparisons: in the early days when stands were a new idea I did use them a lot but made the mistake outlined above [often]. A better way is to put in the new component, leave it for a while, in my case for at least a week, and the changes will be obvious when the original is installed again. Not using the system is also a giveaway. Any product that gets this far is then tried in other known systems, in other rooms to check these findings before the search for customers begins. All systems operate in context: the room, the listener, music used, major components, and accessories all contribute, but in the end it is your judgement that counts. There is no such thing as a universal component. All operate within the system context, but over the years as my product has improved fewer mismatches occur.

This is, in part, due to an insistence that improvements in system sound are essentially musical and not 'hi-fi' or just 'moving things around', and a better understanding of the compromises involved. Yes, there are always compromises!

One final thought: the systems that I have really enjoyed listening to have one thing in common. And it is not cost. They have all been put together with great care and no little effort.

How does it work?

There is no simple answer to this. The scientific approach is not particularly helpful since it requires definition and quantification of the variables, and there are too many, though it is still physics in the end. The ear is the only valid measuring instrument, and being objective about a personal response to music [distinctly subjective] is not always easy. I have another principle that has held good over the years: the closer I think I am to understanding this the closer I am to having all theories turned upside down. And yes, it just happened again!

Start with a visualisation: think of everything around you vibrating. A good analogy is an electron microscope photo of a surface you would always think of as smooth. Extremely lumpy. Into this you put music - a lovely collection of resonances. If the loudspeaker baffle is moving, the cone will not reproduce accurately, electronics may act as microphones, internally energy is produced from transformers [only obvious when they buzz.] All lead to inaccuracy, loss of definition, dynamics etc. So equipment supports are seeking to manage the physical energy reaching and leaving components, trying to hold  equipment still while everything around is moving. It has some similarity with making musical instruments: the way that materials behave and are put together has a significant effect on the end result. There is a considerable degree of intuition mixed in with the science.

Prior to the development of the cord tension supports for the X series racks I had tended to treat loudspeaker stands and equipment racks as different. With speakers you are trying to deal with a large amount of energy produced by the speaker, while avoiding its corruption by structurally borne energy. With electronics smaller amounts of energy produced within have to be protected from larger amounts from the underlying structure. The recent use of Missing Link feet with XF stands has simply wrecked the idea that rock solid contact between spikes and floor is essential. The damned things even work on carpet.